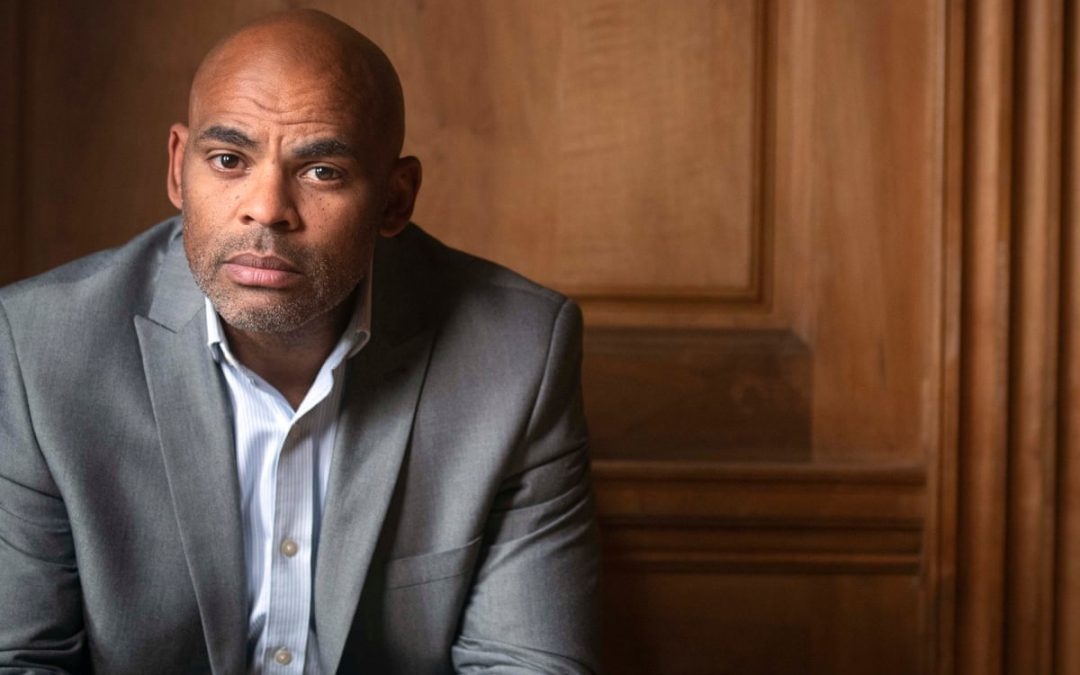 Bristol City Council would like to hear your thoughts and opinions on criminal exploitation and knife crime locally.

“Bring your ideas” is at the heart of Marvin Rees’ approach to city leadership.

He asserts that he wants to “create the conditions in which good people can get good stuff done” and asks, “how can we support you to get done, what you want to get done?”

It’s in this spirit that we invite you to participate in the conversation on the challenging topic of criminal exploitation, so we can collectively explore ideas that our youth and community can benefit from.

Gang violence and knife crime are real issues that are sadly on the increase. This is a country-wide issue, particularly prevalent in cities, and Bristol would like to be a guiding light in finding our way out of violent crime to move positively towards a happier and healthier city. How do these issues affect you and your family, and what do you think the solutions could be?

This initiative is driven by the Mayor of Bristol, Marvin Rees – he will listen to all the opinions presented and use your feedback to help inform how he plans to tackle the rise in violence in Bristol during his Mayoral term.

Join the Let’s Talk for Parents & Carers group on Monday 28th February 2022 to discuss your thoughts on this topic.

Together with council representatives, we’d like to have a positive and optimistic conversation about ways to deter crime and reduce violence in our area.

Please note – opinions voiced during this session will be recorded and fed back to the council, though anonymity of attendees will be maintained. If you have any concerns, please do not hesitate to speak to Judit before or during the meeting. 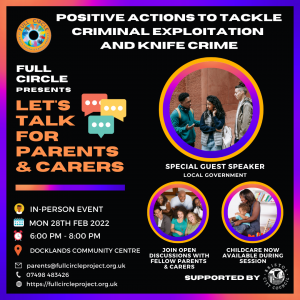 If you need to bring your children along, it’s not a problem as we can now offer free childcare for group attendees. Two DBS checked Full Circle team members will be there to keep children of all ages entertained – they can simply chill out, bring their homework, or play games. Please email Judit to confirm if you’d like to bring your child along – they will be well looked after so you can participate in the group conversation.

As a youth organisation, Full Circle works as part of the Inner City Youth Collective, which provides over 30 regular activities across East Central Bristol. Collectively, we strive to reach vulnerable youth who could be influenced into criminal activity. We offer interventions to keep young people off of the streets, provide a safe space to chat about issues and our youth workers can signpost to specialist organisations if further support is required.

Our Parent and Carer Support Worker, Judit Davis, is also on hand to discuss any specific issues with families and explore potential interventions with you. Call or text on 07498 483426 for support – Judit can support you with one-to-one advice in addition to our parents and carers support group.

Building a Foundation for a Fairer City

🎥 Marvin Rees explains his ambitions for Bristol during his swearing in speech on 10 May 2021.

Marvin himself has three children growing up in the city. He also grew up in East Bristol within a single parent family on benefits. He describes his childhood as not being very enjoyable due to a number of issues he faced in the city, but says that he always had hope. With ambition to stamp out inequality, this hope fuelled him to pursue a career in social justice and set him on the path to becoming our Mayor, which he achieved in 2016.

“Growing up the way I grew up, I just wanted the world to be fairer. I had a deep sense of things not being fair and I wanted to make it fairer. And that’s what I do.”

He’s frank about the way the system works and its challenges, going on to say: “If we’re perfectly straight about it, we’re all fallen, imperfect human beings trying to work in broken institutions in a dysfunctional political economy. And we do our best to make good things happen in the face of that.”

Prior to his political career, Marvin had become sick of the same people talking about the same issues in the media, which led him to pursue a journalism role at the BBC “to give a voice to the voiceless.” Following that, he took his first steps into politics through a diversity programme called Operation Black Vote – it’s for this reason that he’s gained a deep understanding of the importance of creating opportunities for underrepresented groups. Such opportunities can change the course of a young person’s life as well as positively influencing those around them – Marvin’s story reinforces that vision.

Listening to Marvin speak, it’s clear that he strives to create a fairer society, with inequality deemed the root cause of many of our city’s issues. He also advises that thinking creatively is instrumental to finding the right solutions, which is why he advocates gathering opinions from a diverse range of people including youth. He has met with residents in St Pauls a number of times to listen to them and incorporate their opinions into local government strategy.

Acknowledging that “the criminal justice system is a fork in the road for many young people” and having witnessed friends go to prison himself, he invites positive strategy on offender rehabilitation and doesn’t want youth offences to put up barriers for those young people looking to better their lives through training and employment programmes.

Marvin has a strong track record of listening to young people and families to address their concerns and support their ideas for a better city. His strong relationship with Babassa is testament to this as is the implementation of the Belonging Strategy, which works as part of the One City plan to drive initiatives on inclusion, equality and social justice.

The strategy admits, “‘Belonging’ is a simple word for a huge concept. Having a sense of belonging is a vital human need, just like the need for food and shelter.”

“In Bristol, we want to invest in what families need for children to be able to grow up healthy, safe and confident, secure in the knowledge that they belong. It is from these strong foundations that children will go on to belong in their community, to contribute to the life and future of our city, to become the adults they want to be and to have families of their own.”

In Bristol’s Belonging Strategy for Children and Young People: Vision Statement 2021-2024 Marvin states: “It is critical that children and young people feel safe in their communities, that they have the support they need to achieve their potential and that their unique voice is heard, valued, and defines the future of our city.” He goes on to acknowledge that, “No single organisation can deliver this alone. We must work together, investing in our children and families to build a socially and economically inclusive city that works for all children.”

“It is critical that children and young people feel safe in their communities, that they have the support they need to achieve their potential and that their unique voice is heard, valued, and defines the future of our city.”

What has Been Achieved So Far?

Even before becoming Mayor, in 2012 Marvin set up the City Leadership Programme, which now leads onto a six-month mentorship programme with Babbasa and has supported dozens of kids from challenging and underrepresented backgrounds into leadership positions.

Upon taking up his position as Mayor, Marvin declared Bristol a City of Hope, built on ambition, inclusion and social justice.

Under Marvin Rees, the council has already taken steps to raise youth aspirations and help them achieve economic stability. During his first term in office, Marvin provided quality work experiences for over 3,500 children who wouldn’t readily have access to such opportunities. Increasing fairness to the city council, he has achieved accredited Living Wage Employer status, and introduced Ban the Box, which removes employment barriers that those with criminal convictions face, in a bid to reduce reoffending.

What is Safer Streets – Portland Square?

Bristol City Council has been awarded £398,000 to make the area around Portland Square safer, as part of the government’s Safer Streets Fund. Though the project is primarily focused on reduction of acquisitive crime such as street thefts and house burglaries, measures involved including increased CCTV monitoring and community marshals could result in wider benefits of deterring antisocial behaviour and gang violence.

Back in November 2021, a representative for the Safer Streets programme visited our Let’s Talk for Parents & Carers group to discuss the proposed measures in more detail. Parents and Carers raised some concerns about the area covered, as it was unclear to what extent high-risk gateway areas such Wilder Street would be protected. It was an impassioned discussion with plenty of ideas offered, including involving more community organisations and social landlords for support, alongside increased lighting to improve visibility after dark.

You can read more about Safer Streets and view the map on the Bristol City Council website here.

What More Can be Done?

Whilst raising high-level aspirations is a good start, most people, including Marvin, acknowledge that more needs to be done at ground level to work with current offenders and break the vicious cycle that is attracting more young people into criminal activity. Safer Streets also paves a good foundation for further positive action in creating a safer atmosphere and, with further community involvement, the council hopes to roll out more initiatives to support broader crime reduction, especially that which exploits young people.

In light of this, a special Youth Summit will be held on 28 March 2022 to explore ideas and solutions – watch out for further details soon. Feedback from the Let’s Talk for Parents & Carers group will feed into the Youth Summit debate.

New to the Group?

Held at Docklands Community Centre in the heart of St Pauls, we welcome an insightful guest speaker on the last Monday of each month from 6-8pm. There’s no need to book, just turn up on the night and join the conversation or simply listen to others.

Let’s Talk for Parents & Carers is an inclusive space open to all individuals with childcare responsibilities for young people of any age. Whether you’re a mother or father, step-parent, adoptive parent or foster carer, and whatever your religion, cultural background or family setup be it co-parenting, single parenting or blended families, you are encouraged to participate in this fantastic initiative.

If you care for a young person in any capacity, this group is for you! We look forward to seeing you soon.

We use cookies to ensure that we give you the best experience on our website. If you continue to use this site we will assume that you are happy with it.OKRead More